Date recorded: Wednesday, April 6, 2022
Level: All
Medium: Open to any medium – Palden will work in oil

Palden Hamilton demonstrates and narrates a still life painting of spring flowers. Palden is a proponent of honing one’s observational skills through painting small, controlled setups. Being able to paint humble subjects accurately and beautifully is a gateway to understanding and appreciating greater nature. 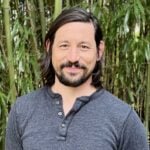 Born and raised in Maryland, Palden Hamilton attended the Gilman School, where he studied under Betsey Heuisler. After receiving his B.F.A. from The School of the Art Institute of Chicago in 2002, he continued his education at the Art Students League of New York, where he studied under Ron Sherr, Harvey Dinnerstein, and Mary Beth Mckenzie. There he was awarded a Merit Award in Realism and the Phylis T. Mason Grant.

Hamilton has done a range of commissioned portrait work since returning to his hometown of Baltimore. He was notably commissioned to paint Maestro Yuri Temirkanov, the musical director of the St. Petersburg Philharmonic Orchestra in Russia. In 2008, 2017, and 2018, he was awarded Certificates of Excellence from the Portrait Society of America.

Hamilton has painted landscape extensively on location in his native Maryland, and on travels to his mother’s homeland, the Himalayan kingdom of Sikkim. As a landscape artist, he has participated in and received honors from Easton, Wayne, Solomons, and Cape Ann plein air events. www.paldenhamilton.com

Sign up for the Past Free Recordings Archive to watch all past free class recordings.  You’ll only need to register one time to access all the recordings in the archive.

About Our Past Free Classes:

This class is part of the Past Free Recordings Archive.  Click the red play button to view the archive.